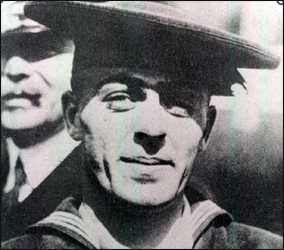 “For heroism and devotion to duty while serving on board the U.S. Submarine O-5 at the time of the sinking of that vessel. On the morning of 28 October 1923, the O-5 collided with the steamship Abangarez and sank in less than a minute. When the collision occurred, BREAULT was in the torpedo room. Upon reaching the hatch, he saw that the boat was rapidly sinking. Instead of jumping overboard to save his own life, he returned to the torpedo room to the rescue of a shipmate whom he knew was trapped in the boat, closing the torpedo-room hatch on himself. BREAULT and BROWN remained trapped in this compartment until rescued by the salvage party 31 hours later.”

Henry Breault was born in Putnam, Connecticut, on 14 October 1900. He enlisted in the British Royal Navy at sixteen years of age and, after serving under the White Ensign for four years, joined the U.S. Navy. On 28 October 1923 Torpedoman 2nd Class Breault was a member of the crew of USS O-5 (SS-66) when that submarine was sunk in a collision. Though he could have escaped, Breault chose to assist a shipmate, and remained inside the sunken submarine until both were rescued more than a day later. For his “heroism and devotion to duty” on this occasion, Henry Breault was awarded the Medal of Honor. Following twenty years of U.S. Navy service, Henry Breault became ill with a heart condition. He died at the Naval Hospital at Newport, Rhode Island, on 4 December 1941.

A head and shoulders photograph of TM2 Henry Breault, showing him wearing the Medal of Honor at the time it was presented to him in March 1924, was published in the February 1972 issue of the magazine “U.S. Naval Institute Proceedings”, with an article by Captain Julius Grigore, Jr., USNR, entitled “The O-5 is Down!”. The photograph, on page 59 of the magazine, shows TM2 Breault looking directly at the camera. He is wearing a blue uniform jumper with a “flat hat”. This image is credited to “The Baltimore Sun” newspaper.