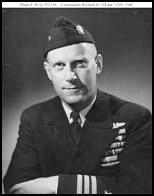 “For conspicuous gallantry and intrepidity at the risk of his life above and beyond the call of duty as Commanding Officer of the USS TANG operating against two enemy Japanese convoys on October 23 and 24, 1944, during her Fifth and last War Patrol. Boldly maneuvering on the surface into the midst of a heavily escorted convoy, Commander O’Kane stood in a fusillade of bullets and shells from all directions to launch smashing hits on three tankers, coolly swung his ship to fire at a freighter and, in a split second decision, shot out of the path of an onrushing transport, missing it by inches. Boxed in by blazing tankers, a freighter, transport and several destroyers, he blasted two of the targets with his remaining torpedoes and, with pyrotechnics bursting on all sides, cleared the area. Twenty-four hours later, he again made contact with a heavily escorted convoy steaming to support the Leyte campaign with reinforcements and supplies and with crated planes piled high on each unit. In defiance of the enemy’ relentless fire, he closed the concentration of ships and in quick succession sent two torpedoes each into the first and second transports and an adjacent tanker, finding his mark with each torpedo in a series of violent explosions at less than a thousand-yard range. With ships bearing down from all sides, he charged the enemy at high speed, exploding the tanker in a burst of flame, smashing the transport dead in the water and blasting the destroyer with a mighty roar which rocked the TANG from stem to stern. Expending his last two torpedoes into the remnants of a once powerful convoy before his own ship went down, Commander O’Kane aided by his gallant command, achieved an illustrious record of heroism in combat, enhancing the finest traditions of the United States Naval Service.”

Richard Hetherington O’Kane was born in Dover, NH on 2 February 1911. He graduated from the U.S. Naval Academy in 1934, served aboard the cruiser Chester and destroyer Pruitt, received submarine instruction in 1938, and served on USS Argonaut until 1942. Lieutenant O’Kane then joined the pre-commissioning crew of the submarine Wahoo, serving as her Executive Officer under Commanding Officer Dudley W. Morton, and establishing a record as a very promising tactician.

In July 1943, Lieutenant Commander O’Kane became Prospective Commanding Officer of USS Tang, which he commanded throughout her entire career. In five war patrols, Tang sank an officially recognized total of 24 Japanese ships, establishing one of the Pacific War’s top records for submarine achievement. He was captured by the Japanese when his ship was sunk off China in October 1944, and was secretly held prisoner until the war’s end ten months later. Following his release, Commander O’Kane was awarded the Medal of Honor for his “conspicuous gallantry and intrepidity” during his submarine’s final operations against Japanese shipping.

Following WW II, Commander O’Kane served in the Pacific Reserve Fleet as Commanding Officer of the submarine tender Pelias, testified at Japanese war crimes trials, was Executive Officer of the submarine tender Nereus and Commander of Submarine Division 32. He attended the Armed Forces Staff College in 1950-51, and was assigned to Submarine School at New London, CT, initially as an instructor and, in 1952-53, as Officer in Charge.

Promoted to Captain in July 1953, he commanded the submarine tender Sperry until June 1954 and became Commander Submarine Squadron Seven. After attending Naval War College in 1955-56, he served in Washington, DC, with the Ship Characteristics Board. Captain O’Kane retired in July 1957 and, on the basis of his extensive combat awards, was simultaneously advanced to Rear Admiral on the Retired List. He died on 16 February 1994. The guided-missile destroyer USS O’Kane (DDG-77) is named in honor of Rear Admiral O’Kane.

Oil painting by Commander Albert K. Murray, USNR, Official U.S. Navy Combat Artist, depicting Commander O’Kane on board the submarine Tang (SS-306) in 1944. This photograph was taken to support the Metropolitan Museum of Art exhibition “Your Navy: Its contribution to America from Colonial Days to World Leadership”, which opened on 25 October 1948. Official U.S. Navy Photograph, from the collections of the Naval Historical Center.