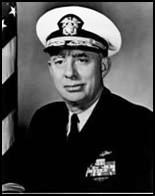 “For conspicuous gallantry and intrepidity at the risk of his life above and beyond the call of duty as commanding officer of the U.S.S. Parche in a predawn attack on a Japanese convoy, 31 July 1944. Boldly penetrating the screen of a heavily escorted convoy, Comdr. Ramage launched a perilous surface attack by delivering a crippling stern shot into a freighter and quickly following up with a series of bow and stern torpedoes to sink the leading tanker and damage the second one. Exposed by the light of bursting flares and bravely defiant of terrific shellfire passing close overhead, he struck again, sinking a transport by two forward reloads. In the mounting fury of fire from the damaged and sinking tanker, he calmly ordered his men below, remaining on the bridge to fight it out with an enemy now disorganized and confused. Swift to act as a fast transport closed in to ram, Comdr. Ramage daringly swung the stern of the speeding Parche as she crossed the bow of the onrushing ship, clearing by less than 50 feet but placing his submarine in a deadly crossfire from escorts on all sides and with the transport dead ahead. Undaunted, he sent 3 smashing “down the throat” bow shots to stop the target, then scored a killing hit as a climax to 46 minutes of violent action with the Parche and her valiant fighting company retiring victorious and unscathed.”

Ramage was born on January 19, 1909, in Monroe Bridge, MA, and graduated from the U.S. Naval Academy in 1931. From 1931 to 1935, he served aboard several ships, including the USS S-29 (SS-134.) During World War II, Ramage was highly decorated for his actions in combat, being awarded the Silver Star, two Navy Crosses, and the Medal of Honor.

Ramage was stationed at Pearl Harbor on the staff of the Commander, Submarines, Pacific during the Japanese attack in December 1941. In early 1942, he served on his first patrol of the war as the navigator of the USS Grenadier (SS-210). He was awarded the Silver Star as a member of the Grenadier’s crew for “conspicuous gallantry and intrepidity” while patrolling enemy waters.

In June 1942, assumed his first command, the USS Trout (SS-202). Under his command, the Trout conducted four war patrols and sank three ships. He was awarded the Navy Cross for valor for actions while in command of the Trout at Midway, Truk, the Solomons, and the South China Sea. In May 1943, he assumed command of the new Balao-class submarine, the USS Parche (SS-384).

On July 31, 1944, Ramage commanded the Parche in a dawn assault on a heavily-escorted Japanese convoy, during which the Parche sank two ships and badly damaged three others. For this action, he received the Medal of Honor, which was formally presented to him by President Franklin D. Roosevelt on January 10, 1945.

From 1953–1954, he was commanding officer of the amphibious cargo ship USS Rankin (AKA-103). In 1963, he served as Deputy Commander of Submarine Forces, Atlantic Fleet. In that role, he led the search operations for the submarine USS Thresher (SSN 593), which had sunk in the Atlantic. In 1963, he was promoted to Vice Admiral and became Deputy Chief of Naval Operations. In 1967, he become Commander, Military Sea Transportation Service. He retired from the Navy in 1969. In 1935, Ramage married Barbara Alice Pine, who was the daughter of U.S. Coast Guard Vice Admiral James Pine. They had two sons and two daughters. Ramage died in his home at Bethesda, Maryland, in 1990, and is buried in Arlington National Cemetery.

The guided missile destroyer USS Ramage (DDG 61) was named for him. Several submarine-related facilities also bear his name, including the administrative building (Ramage Hall) of the Submarine Training Facility in Norfolk, Virginia, and the headquarters building at Naval Submarine Base New London, which was dedicated in his honor on August 20, 2010.