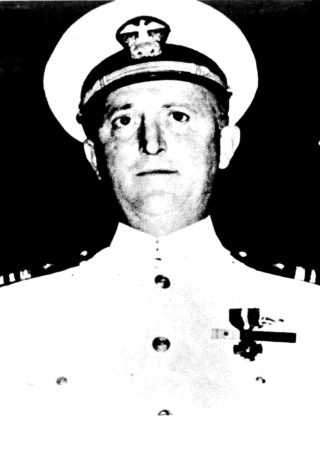 “For distinguished gallantry and valor above and beyond the call of duty as Commanding Officer of the USS GROWLER during her Fourth War Patrol in the Southwest Pacific from 10 January 1943 to 7 February 1943. Boldly striking at the enemy in spite of continuous hostile air and anti- submarine patrols, Commander Gilmore sank one Japanese freighter and damaged another by torpedo fire, successfully evading severe depth charges following each attack. In the darkness of night on 7 February, an enemy gunboat closed range and prepared to ram the USS GROWLER. He daringly maneuvered to avoid the crash and rammed the attacker instead, ripping into her port side at 17 knots and bursting wide her plates. In the terrific fire of the sinking gunboat’s heavy machine guns, Commander Gilmore calmly gave the order to clear the bridge, and refusing safety for himself, remained on deck while his men preceded him below. Struck down by the fusillade of bullets and having done his utmost against the enemy, in his final living moments, Commander Gilmore gave his last order to the officer of the deck, ”Take her down.” The USS GROWLER dived; seriously damaged but under control, she was brought safely to port by her well-trained crew inspired by the courageous fighting spirit of their dead Captain, By his prompt actions and valiant spirit of self-sacrifice, Commander Gilmore reflected great credit upon himself and upheld the highest traditions of the United States Naval Service. He gallantly gave his life for his country.”

Howard Gilmore was born in Selma, Alabama, September 29, 1902 and enlisted in the Navy November 15, 1920. He graduated from the U. S. Naval Academy in 1926 and reported to the battleship USS Mississippi (BB-41). Gilmore underwent submarine training in 1930 and in the years that followed served in various submarines and at stations ashore.

Gilmore served as the Executive Officer of USS Shark (SS-174), and in a near-fatal incident, narrowly survived an assault by a group of thugs in Panama, who cut his throat during an excursion ashore. In 1941, he assumed command of USS Shark (SS-174), and was transferred the day after the Pearl Harbor attack to command USS Growler (SS-215), under construction. Gilmore commanded Growler skillfully during three Pacific war patrols. On his first, Growler attacked three enemy destroyers off Kiska, sinking one and severely damaging the other two, while narrowly avoiding two torpedoes fired in return, for which Gilmore received the Navy Cross. On his second patrol, Growler sank four merchant ships totaling 15,000 tons in the East China Sea near Taiwan, for which he received a gold star in lieu of a second Navy Cross.

Growler continued to take a heavy toll of shipping on her fourth war patrol, and on the night of February 7, 1943, she approached a convoy stealthily for a surface attack. Suddenly a fast gunboat, Hayasaki, closed and prepared to ram. As the small ship charged out of the darkness, Gilmore sounded the collision alarm and shouted, “Left full rudder” to no avail. The Growler hit the Japanese adversary amidships at 17 knots, heeling 50 degrees, bending 18 feet of her bow sideways, and disabling the forward torpedo tubes.

Simultaneously, the Japanese crew unleashed a burst of machine gun fire at Growler’s bridge, killing the assistant Officer of the Deck and a lookout, and wounding Gilmore and two other men. “Clear the bridge!” Gilmore ordered as he struggled to hang on. As the rest of the bridge party went below, the Executive Officer, Lieutenant Commander Arnold Schade, shaken by the impact and dazed by his own fall into the control room, waited for his captain to appear. Instead, from above came the shouted command: “Take her down!” Realizing that he could not get himself below in time if the ship were to escape, Gilmore chose to make the supreme sacrifice for his shipmates. Schade hesitated briefly, and then followed his captain’s last order and submerged the crippled ship.

Surfacing some time later in hope of reattacking the Hayasaki, Schade found the seas empty. The Japanese ship had survived the encounter, but there was no sign of Gilmore, who apparently had drifted away in the night. Schade and Growler’s crew managed to control the ship’s flooding and limped back to Brisbane on February 17.

For sacrificing his own life to save his ship, Commander Gilmore was posthumously awarded the Medal of Honor. In September 1943, the submarine tender USS Howard W. Gilmore (AS-16) was named for him and sponsored by his widow. Even today, “Take her down!” remains one of the legendary phrases of the U.S. Submarine Force.

To honor and remember Commander Gilmore, a gravestone was placed at the Howard Family Plot (Gilmore’s mother’s maiden name), at Magnolia Cemetery, Meridian, Mississippi, by Ed Shields, Ward Calhoun, and the Lauderdale County Department of Archives and History, Inc.