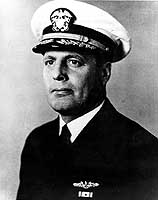 “For conspicuous gallantry and intrepidity at the risk of his life above and beyond the call of duty as Commander of a Submarine Coordinated Attack Group with Flag in the U.S.S. Sculpin, during the Ninth War Patrol of that vessel in enemy-controlled waters off Truk Island, November 19, 1943. Undertaking this patrol prior to the launching of our first large-scale offensive in the Pacific, Captain Cromwell, alone of the entire Task Group, possessed secret intelligence information of our submarine strategy and tactics, scheduled Fleet movements and specific attack plans. Constantly vigilant and precise in carrying out his secret orders, he moved his underseas flotilla inexorably forward despite savage opposition and established a line of submarines to southeastward of the main Japanese stronghold at Truk. Cool and undaunted as the submarine, rocked and battered by Japanese depth-charges, sustained terrific battle damage and sank to an excessive depth, he authorized the Sculpin to surface and engage the enemy in a gun-fight, thereby providing an opportunity for the crew to abandon ship. Determined to sacrifice himself rather than risk capture and subsequent danger of revealing plans under Japanese torture or use of drugs, he stoically remained aboard the mortally wounded vessel as she plunged to her death. Preserving the security of his mission at the cost of his own life, he had served his country as he had served the Navy, with deep integrity and an uncompromising devotion to duty. His great moral courage in the face of certain death adds new luster to the traditions of the United States Naval Service. He gallantly gave his life for his country.”

John Philip Cromwell was born in Henry, Illinois, on 11 September 1901. Appointed to the U.S. Naval Academy in 1920, he graduated in June 1924 and served initially in the battleship USS Maryland (BB-46). In 1926, he attended submarine school and was assigned to USS S-24 (SS-129) during 1927-29. He next had three year’s diesel engineering instruction, followed by further tours of duty in submarines.

Lieutenant Cromwell commanded USS S-20 (SS-125) in 1936-37, and then served on the staff of Commander Submarine Division 4. He was promoted to the rank of Lieutenant Commander in 1939 and spent two years in Washington, D.C. with the Bureau of Engineering and Bureau of Ships. In May 1941, he became Engineer Officer for the Pacific Fleet submarine force. During 1942-43, he commanded Submarine Divisions 203, 44 and 43.

Following promotion to Captain, he went to sea in USS Sculpin (SS-191) as prospective commander of a mid-Pacific submarine wolf pack. While attacking a Japanese convoy on 19 November 1943, Sculpin was forced to the surface, fatally damaged in a gun battle and abandoned by her surviving crew members. Captain Cromwell, who knew secret details of the impending operation to capture the Gilbert Islands, deliberately remained on board as she sank. For his sacrificial heroism in preventing the enemy from obtaining this information, he was posthumously awarded the Medal of Honor.