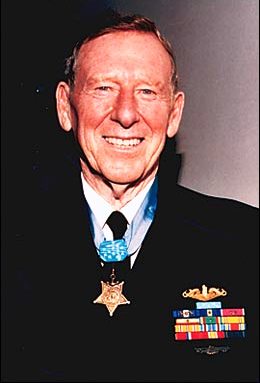 “For conspicuous gallantry and intrepidity at the risk of his life above and beyond the call of duty as Commanding Officer of the U.S.S. Barb during her Eleventh War Patrol along the east coast of China from 19 December 1944, to 15 February 1945. After sinking a large enemy ammunition ship and damaging additional tonnage during a running 2-hour night battle on 8 January, Commander Fluckey, in an exceptional feat of brilliant deduction and bold tracking on 23 January, located a concentration of more than 30 enemy ships in the lower reaches of Nankuan Chiang (Mamkwan Harbor). Fully aware that a safe retirement would necessitate an hours’ run at full speed through the uncharted, mined, and rock-obstructed waters, he bravely ordered, ‘Battle Station – Torpedoes’! In a daring penetration of the heavy enemy screen, and riding in 5 fathoms of water, he launched the Barb’s last forward torpedoes at 3,000-yard range. Quickly bringing the ship’s stern tubes to bear, he turned loose four more torpedoes into the enemy, obtaining eight direct hits on six of the main targets to explode a large ammunition ship and cause inestimable damage by the resultant flying shells and other pyrotechnics. Clearing the treacherous area at high speed, he brought the Barb through to safety and 4 days later sank a large Japanese freighter to complete a record of heroic combat achievement, reflecting the highest credit upon Commander Fluckey, his gallant officers and men, and the United States Naval Service.”

Eugene Bennett Fluckey was born in Washington, DC on 5 October 1913 and graduated from the U.S. Naval Academy in 1935. Ensign Fluckey’s first assignments, aboard the battleship Nevada and the destroyer McCormick were followed in 1938 by instruction at the Submarine School, Groton, CT. In December of that year, Lieutenant (Junior Grade) Fluckey was assigned to the submarine S-42. He served in USS Bonita in 1941-1942, during which time he was promoted to Lieutenant.

From mid-1942 to early 1944, he received Naval Engineering instruction and attended Prospective Commanding Officers’ School at New London, then went to the Pacific where he made a war patrol as Prospective Commanding Officer of the submarine Barb. Promoted to Lieutenant Commander in May 1943 and Commander in March 1944, he assumed command of Barb in late April of the latter year. During five war patrols Commander Fluckey’s initiative and aggressiveness cost the enemy at least sixteen ships, many small craft and facilities ashore, earning a Medal of Honor and four Navy Crosses for himself, and Presidential Unit Citations and the Navy Unit Commendation for Barb.

In August 1945, Commander Fluckey became Prospective Commanding Officer of the Dogfish, then under construction at Groton, CT. However, this assignment ended after a few months and he began duty in Washington, DC, first in the Office of the Secretary of the Navy, then at the War Plans Division, and beginning in late 1945, as Personal Aide to the Chief of Naval Operations, Fleet Admiral Chester W. Nimitz. In June 1947, he assumed command of the modernized submarine Halfbeak. In 1949-1950, he served on the staff of Commander, Submarine Force, Atlantic Fleet, and from October 1950 to July 1953 was U.S. Naval Attaché at Lisbon, Portugal.

Command of Submarine Division 52 in 1953-1954 was followed, after his promotion to the rank of Captain, by command of the submarine tender Sperry and of Submarine Squadron FIVE. During the later 1950s, Captain Fluckey was assigned to the U.S. Naval Academy, attended the National War College and served with the National Security Council. Selection for promotion to Rear Admiral in mid-1960 was followed by tours as Commander Amphibious Group FOUR, presidency of the Board of Inspection and Survey and a temporary assignment as Task Force Director of the Shipyards Appraisal Group. In June 1964 Rear Admiral Fluckey became Commander Submarine Force, Pacific, and in July 1966 he reported as Director of Naval Intelligence. Two years later, he became Chief of the Military Assistance Advisory Group, Portugal. Rear Admiral Eugene B. Fluckey retired from active duty at the beginning of August 1972.