Established in 1986, The Vice Admiral Charles A. Lockwood Award for Submarine Professional Excellence recognizes individuals (Active or Reserve) for achievement, contribution, specific action or consistent performance, which best exemplifies the traditional spirit embodied in the Submarine Force. Three awards are presented annually – one each to an officer, a chief petty officer and an E-6 or junior enlisted submariner.

Read about VADM Charles A. Lockwood 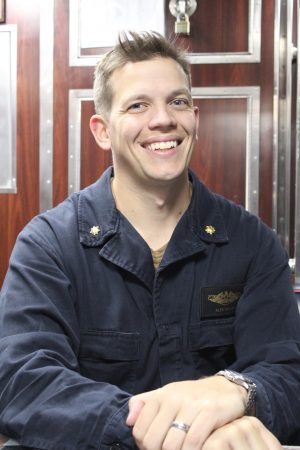 For outstanding performance as Engineer Officer in USS ALBANY (SSN 753).

Lieutenant Commander Rinaldi has, in his short time aboard, dedicated himself completely to the success of ALBANY. Following ALBANY’s three consecutive failed engineering exams, as a newly reported Engineer he brought qualifications, training, material condition, level of knowledge, and casualty response back to standards. He prevailed through an uncommon work ethic and tremendous personal sacrifice. Most impressively, he did it with a positive attitude and all the while inspiring those around him. LCDR Rinaldi is not only a fantastic engineer, but also a brilliant teacher. Using his skills, he has trained and influenced every department on the ship. He prepared division officers for Officer of the Deck qualifications, and led tactical, ship handling, and navigational training sessions. He assisted in developing sea trials operational training plans in conjunction with preparing his department for the first critical reactor plant operations in five years. All examinations for these impending operations were completed with excellent results. LCDR Rinaldi has single handedly brought a new atmosphere on board which promotes all aspects of improving officer and enlisted retention. He personally assisted several candidates with preparations for officer selection. LCDR Rinaldi has improved the confidence and aptitude of the entire crew, ensuring ALBANY’s future leaders will be prepared to lead our force in the future. He is truly deserving of the recognition by the Naval Submarine League Charles A. Lockwood Award for submarine professional excellence.

After graduating from the U.S. Naval Academy in 1912, Charles Lockwood served in the battleships Mississippi and Arkansas. Subsequently, he served in ten surface ships, commanding four; commanded eight submarines; and had command of two submarine divisions.
In April 1942, Vice Admiral Lockwood was assigned as Commander of Submarines, Southwest Pacific. In February 1943, he became Commander, Submarines, U.S. Pacific Fleet. As COMSUBPAC, he was responsible for planning and executing the submarine war against the Imperial Japanese Empire. This responsibility he carried out to perfection, culminating in U.S. submarines penetrating Japanese home waters in the Sea of Japan. As an astute tactician and truly professional naval officer, his service and accomplishments were recognized time and again in the form of medals and citations. Extracts from selected citations are included here as examples of Vice Admiral Lockwood’s service to his country and the Allied Forces:
“For exceptionally meritorious service… as Commander Submarines, Southwest Pacific… (he) served with distinction during a period when Japanese air and sea power was at its height. A daring, forceful and inspiring leader, he directed the operations of his forces aggressively in carrying the attack to the enemy with the result that the submarines under his command sank 58 enemy ships and damaged 41 others…”
“For exceptionally meritorious conduct… he initiated an experimental MK 14 Torpedo Test program… the increased efficiency resulted in increased tonnage of enemy ships sunk and this in turn has improved the confidence of the officers and enlisted men of the submarine force.”
“… he brought his gallant command to the peak of combat efficiency in support of the Allied offensive against Iwo Jima and Okinawa… contributed materially to the success of our sustained drive to force the capitulation of the Japanese Empire…”
Those presented the Naval Submarine League Vice Admiral Charles A. Lockwood Award for Professional Excellence can cherish with pride this tie to one of our great naval heroes.