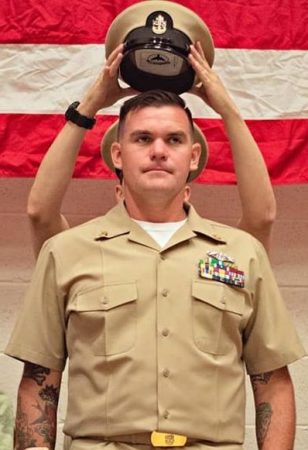 Petty Officer Hoel played a key role in the success of JOHN WARNER’s pre-deployment preparations and successful deployment to the European Command Area of responsibility, as a Weapons Supervisor and qualified Virginia Class Pilot. Conducting the first ever expeditionary reload of a Virginia Payload System (VPT) deployed in theater in the midst of the ships deployment, he was the stabilizing force which led to a seamless transition from mission tasking at sea to safe operations in port. His leadership and management of his division resulted in the readiness demonstrated by JOHN WARNER executing the first ever tactical launch of a Virginia Class Submarine and the VPT System. In addition, the weapons team maintained the highest level of knowledge and operational expertise in all areas of theater operations and successfully launched 6 Tomahawk Land Attack Cruise missiles. His meticulous planning and foresight resulted in the completion of over 100 hours of corrective maintenance to maintain full weapons systems operational capability. His ability to train junior personnel provided watch bill flexibility to the ship. His direct supervision and ownership of force protection operations in foreign ports led to zero incidents, ensuring the safety of the ship and crew for the entire deployment. Petty Officer Hoel performs at a level well above his pay grade and embodies the characteristics of a Chief Petty Officer. He is most deserving of the recognition being awarded by the Naval Submarine League Torpedoman Second Class Henry Breault Award for submarine professional excellence.

Henry Breault was born in Putnam, Connecticut, on 14 October 1900. He enlisted in the British Royal Navy at sixteen years of age and, after serving under the White Ensign for four years, joined the U.S. Navy. On 28 October 1923 Torpedoman 2nd Class Breault was a member of the crew of USS O-5 (SS-66) when that submarine was sunk in a collision. Though he could have escaped, Breault chose to assist a shipmate, and remained inside the sunken submarine until both were rescued more than a day later. For his “heroism and devotion to duty” on this occasion, Henry Breault was awarded the Medal of Honor. Following twenty years of U.S. Navy service, Henry Breault became ill with a heart condition. He died at the Naval Hospital at Newport, Rhode Island, on 4 December 1941.