Established in 1986, The Rear Admiral Jack N. Darby Award for Inspirational Leadership and Excellence of Command recognizes a submarine officer who has displayed exceptional leadership in command. One award is presented annually. 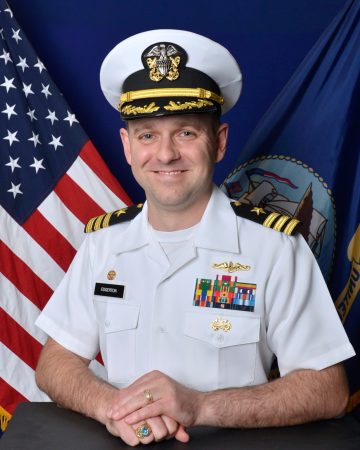 Commander Edgerton has fostered a culture of high standards, individual ownership, and achievement among his crew. His consistently high level of performance resulted in a crew that was superbly prepared for all missions. COLUMBIA completed two recent Western Pacific deployments. During these deployments COLUMBIA excelled during several missions, accomplishing tasking in the most challenging littoral environment. CDR Edgerton brings out the best qualities of his crew. He educates, inspires, and empowers his subordinates, producing skilled leaders who employ keen decision-making habits. His strong mentorship and guidance have resulted in high officer and enlisted retention achievements. COLUMBIA was lauded by the Type Commander for his efforts to balance in-port work load with crew quality of life initiatives and was awarded the 2017 Retention Excellence Award. As a team player, he maintained close working relationships with the Fleet Maintenance Branch and Pearl Harbor Naval Shipyard, ensuring COLUMBIA completed all maintenance periods on-time or ahead of schedule. With strong standards for material readiness, he developed a team with a fix-it-now mentality that minimized equipment in reduced status or out of commission. As a result of CDR Edgerton’s leadership and teamwork, COLUMBIA was awarded the 2017 CSS-7 Battle Efficiency “E.” He clearly merits recognition by the Naval Submarine League Jack N. Darby Award for inspirational leadership and excellence in command.

Jack Darby was commissioned through the Naval Reserve Officer Training Corps, upon graduation from the University of Colorado in 1958. He first served in USS John S. McCain (DL 3). Following Submarine School in 1961, he reported to USS Caiman (SS 323). He qualified in submarines in Caiman, was accepted into the Nuclear Power Program, and completed a year of training in May 1964. He next served in USS Dace (SSN 607) and then USS Theodore Roosevelt (SSBN 600), where he fleeted up to Executive Officer. Command of USS Thomas Jefferson (SSBN 618) was followed by command of USS Benjamin Franklin (SSBN 640).
He went on to serve as Executive Assistant to the Deputy Chief of Naval Operations for Submarine Warfare, Commandant of Midshipmen at the U.S. Naval Academy, Commander Submarine Squadron TEN and Deputy Director Attack Submarine Division, OPNAV, where he was selected for flag rank. Rear Admiral Darby went on to be Deputy for Politico-Military Affairs in the Plans and Policy Directorate, the Joint Chiefs of Staff. In June 1985, Rear Admiral Darby assumed command of the Submarine Force, U.S. Pacific Fleet.
The Naval Submarine League annual leadership award honors this dynamic and inspirational officer. Throughout his naval career, Jack Darby instilled a sense of purpose and dedication to excellence in all who served with him. His devotion to duty, his uncompromised integrity, and his exemplary personal manner epitomizes the qualities one identifies with the term “command presence.” His assignment as Commandant of Midshipmen was particularly appropriate since it gave then Captain Darby the opportunity to touch the lives and careers of so many aspiring young officers. His last command, the Pacific Submarine Force, once again allowed him to influence directly officers in command of the ships of the force.
The commanding officers who are selected for the Naval Submarine League Rear Admiral Jack N. Darby Award for Inspirational Leadership and Excellence of Command can be very proud to be thus associated with an exceptional and inspirational leader.