Established in 1986, The Rear Admiral Frederick B. Warder Award for Outstanding Achievement recognizes a specific action, contribution or continuing performance, which most positively influenced the reputation, readiness or future well-being of the submarine force. One award is presented annually to a government employee (Civilian, Active or Reserve military, LCDR or junior).

Read about RADM Frederick B. Warder 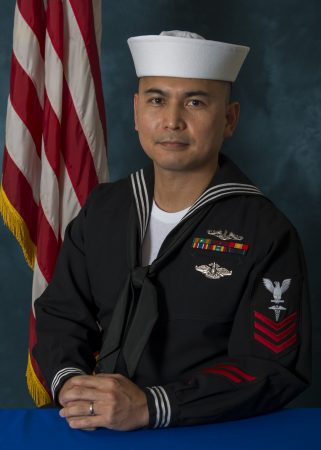 For outstanding meritorious service in the performance of duties as an Independent Duty Corpsman in USS PENNSYLVANIA (SSBN 735) (Blue).

As the Medical Department Head, Petty Officer Sy manages seven command critical programs, while providing emergency medical care, maintaining 100% record accountability, and ensuring a high state of medical/dental readiness. His ability to manage his programs to the highest standards assisted in attaining high marks during several recent NTPI, ORSE, and Medical Department Examinations. During a recent Industrial Hygiene Survey, he assisted in the evaluation of underway noise exposures aboard PACFLT submarines. His assessment resulted in evaluating and improving the medical surveillance of over 1400 personnel from 10 trident submarines. As a leader, Petty Officer Sy supervises and trains eight crew members of the Emergency Medical Assessment Team (EMAT), ensuring the best deployed care for the crew. He is an expert in the Radiation Health Program and provides mentorship and guidance to one Division Officer and five Engineering Laboratory Technicians. During the most recent patrol, he effectively administered emergency treatment to a crew member who suffered a brain seizure and kidney infection. Petty Officer Sy dispensed extensive medication to manage infection, pain, and fever and was able to stabilize the patient for 5 days before a MEDEVAC was available. He led a team of 5 EMAT members and established round the clock care. His swift action and medical treatment directly resulted in a successful MEDEVAC and overall recovery.

Petty Officer Sy’s sustained superior performance and his significant contribution to the mission of the Submarine Force make him most deserving of the Naval Submarine League Frederick B. Warder award for outstanding achievement.

The Naval Submarine League Outstanding Achievement Award is named for Rear Admiral Frederick Burdette Warder, USN (Retired.) Admiral Warder was a true hero of the Submarine Service during World War II and a dynamic leader throughout his active career. As a result of his aggressive and innovative leadership during a war patrol, he was dubbed “FEARLESS FREDDIE,” by his crew in Seawolf.

A member of the 36th class at the Submarine School, he served in S-16 during his initial submarine training and went on to command S-38 and then Seawolf(SS 197). He completed seven war patrols in command of Seawolf, and is credited with sinking eight Japanese ships totaling 38,900 tons. For his performance in Seawolf, he was cited for “displaying great courage and leadership in the face of aggressive enemy advances…” Later, he was assigned by Commander Submarine Force, Pacific Fleet as the Commander of the second Wolfpack, with Snook, Harder, and Pargo in the pack. Their combined action sank seven ships.

His wartime duties concluded with his assignment as Commander Submarine Division 122. From 1944 to 1946, then Captain Warder was Commanding Officer of the Submarine School. Here again, the young submarine officers gained from his leadership, and many of them became the first commanding officers of our early nuclear powered and ballistic missile submarines. RADM Warder’s submarine career culminated in his assignment as Commander Submarine Force U. S. Atlantic Fleet, where his leadership was again felt, as submarines moved into the era of nuclear power and the sea based leg of the nation’s triad of strategic defense.

Recipients of the Naval Submarine League Rear Admiral Frederick B. Warder award for Outstanding Achievement can be justly proud to have this link with a courageous, aggressive and innovative fighter who was esteemed by his crew, and who contributed greatly to the advance of submarine warfare.