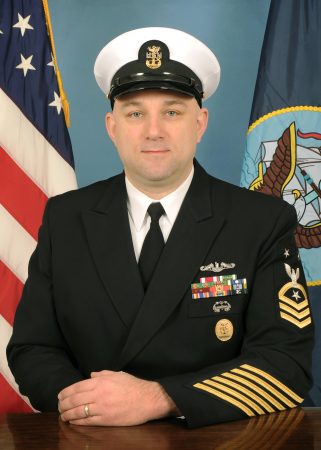 For outstanding meritorious service as Chief of the Boat in USS ALABAMA (SSBN 731) (Gold).

Under the leadership of Master Chief Rauch, ALABAMA (Gold) enjoyed unparalleled success in every mission area over the last three years. His positive leadership, superb management skills, uncompromising standards, and outstanding foresight were the key ingredients behind the ship’s sustained superior performance. His leadership through four deterrent patrols, three Operational Reactor Safeguards, two Tactical Readiness Evaluations, two Defense Nuclear Surety/Augmenting Technical Proficiency Inspections, and a Supply Management Inspection were key factors in assuring superior grades in all areas. ALABAMA (Gold) amassed a record number of awards during his tour. They included: two Battle Efficiency “E’ awards, two Engineering red “E”s, and two White “W” awards, two PACFLT Retention Excellence Awards, one Fleet Trident Outstanding Performance Award, and the Omaha trophy. During his tenure as Chief of the Boat, his steady and focused leadership led to improvements in every facet of the ship’s operations while simultaneously improving retention, advancement, and crew morale. His aggressive and meticulous attention to the ship’s manning ensured ALABAMA (Gold) is one of the best manned submarines in the fleet. His mentoring of assigned personnel resulted in a 62% advancement in rate for E4-E6. Nine CPO selections and an LDO selection during his tour can also be attributed to his support and counseling. CMDCM Rauch was absolutely essential to ALABAMA’s success and he is widely respected on the Bangor waterfront. His spirit, leadership, and zeal make the difference. He is truly deserving of recognition by the Naval Submarine League Master Chief Frank A. Lister Award for exceptional leadership and motivation.

FLTCM Lister was awarded numerous letters of commendations for outstanding performance of duty, and advanced quickly from Seaman Apprentice (E-2) to Torpedoman Second Class (E-5), setting a personal goal to become a Chief Torpedoman and serve as a Chief of the Boat (COB). FLTCM Lister then served aboard USS Bugara (SS 331) as Leading Torpedoman, After Torpedo Room and completed one WESTPAC deployment.

In 1962, he attended Launcher Technician training at the Guided Missile School in Dam Neck VA and graduated first in his class. He was then assigned to USS Robert E. Lee (SSBN 601) (BLUE), where he completed six deterrent patrols and an 18-month shipyard overhaul in Vallejo CA. After overhaul, he was transferred to USS Robert E. Lee (SSBN 601) (GOLD), where he was advanced to Chief Torpedoman and served as Chief of the Boat/Enlisted Advisor, and completed five deterrent patrols.

In his next assignment at the Navy Recruiting Station, Salt Lake City, he distinguished himself as an outstanding navy recruiter, advancing from Field Recruiter to Station Supervisor to Zone Supervisor, Utah/Eastern Nevada. His zone consistently led the nation in Advanced Electronic and Nuclear Power enlisted recruiting.

FLTCM Lister next served as Chief of the Boat of the commissioning crew of USS Los Angeles (SSN 688), where he became the first person to be selected and assigned to a Chief of the Boat position by the Bureau of Naval Personnel (BUPERS).

FLTCM Lister was selected to serve as the Atlantic Fleet Submarine Force Master Chief (FORCM) in 1975 when he served for Force Commanders VADM Joe Williams, Jr. and VADM Ken Carr for four years. In 1979, he served as FLTCM for CINCLANT, ADM Harry Train, for three years. FLTCM Lister was also selected three times, in 1975, 1978 and 1982, as a finalist for Master Chief Petty Officer of the Navy (MCPON).

FLTCM Lister retired from the Navy in 1982 and became the President and CEO, Non Commissioned Officers Association in San Antonio, TX.