This award recognizes individuals whose work has been of significant importance to the Submarine Force. Some will be in high visibility positions, but of equal importance are those individuals who are less visible but whose work is best understood and appreciated by their associates on the submarine team. The criteria for the Naval Submarine League Distinguished Civilian Award are outlined in COMSUBLANT/COMSUBPAC INSTRUCTION 1650.6D, Enclosure (1), Section 10.  Nomination packages should be sent to the Executive Director of the Naval Submarine League. 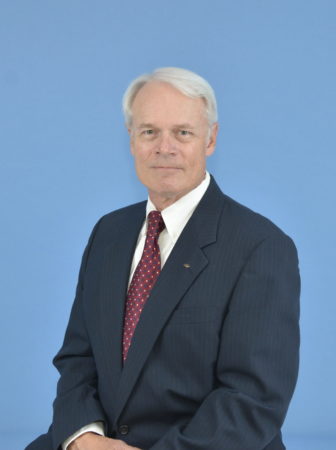 For meritorious service as the Director of the Applied Research Laboratory at the University of Texas at Austin. Dr. Huckabay has devoted 40 plus years in developing and improving U. S. Navy sonar systems. He has succeeded in assembling a group of like-minded technologists who are totally committed to maintaining U. S. Navy technical and operational superiority. Under his leadership the Applied Research Laboratory at the University of Texas has developed an extensive list of mission critical sonar systems that are in daily use on submarines, underwater vehicles and surface ships. These systems include submarine and mine detection and avoidance systems, anti-submarine warfare systems, submarine under-ice navigation systems, deep submergence obstacle avoidance systems, underwater mapping systems, UUV sonars for navigation and ASW, secure depth sounding sonars, and landing craft obstacle avoidance systems. He has also led the development of high-resolution sonars for swimmer detection and classification, mine neutralization, underwater imaging, naval mine mechanisms, and various EOD applications. Dr. Huckabay has participated in numerous Navy policy and technology committees providing research-oriented perspective to those planning and executing future submarine systems. Dr. Huckabay’s accomplishments truly merit his being recognized as a national asset, and the recipient of the 2021 Naval Submarine League Distinguished Civilian Award.